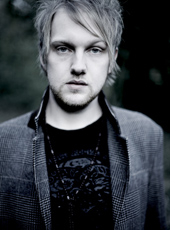 The story of how Alexander Wolfe’s debut album ‘Morning Brings a Flood’ came to be, is not your typical one. Originally intended to be an acoustic collection of songs that captured the stark difference between darkness & light (in music, life, our experiences, emotions, day and night), what began life as some simple recordings, evolved into a dense, sprawling, internally-driven piece of work.

Determined to make the record he had in his head, Alex took a completely DIY approach and shut himself away in various lofts, bedrooms and studios around London and Buckinghamshire, where he played all of the instruments (bar the drums, the strings & the horns) and took a self-taught crash course in recording and production. The result is an utterly personal, direct musical insight to the weird and wonderful, twisted world of Alexander Wolfe.

Flitting between the intimate and the lonely to the upbeat and majestic, the 11 songs on this record are about the trappings of the human mind – the high and lows, the dark and light, empathy, panic attacks and paranoia, experiences of love and loss, all wrapped in charming lyrical metaphors and sweeping musical drama. Says Alex: “ ‘Prague Song’ is a waltz about the need to get lost, ‘Teabags in Ashtrays’ is about mistaking losing your sanity with gaining clarity…. ‘Breakdown’ is self-explanatory, and ‘Till Your Ship Comes In’ is about fighting off darkness by immersing yourself in the seemingly superficial things.”
But had it not been for a strange twist of fate when Wolfe was growing up, this album may never have seen the light of day, as he explains:

” I was born Alexander Gordon de Menthon on Christmas Eve, 1981. I moved with my parents to South East London at the age of 2 where I spent my formative years growing up in Woolwich.

I spent years playing in various bands and was always frustrated by the compromises that were necessary to hold a band together. I was very close to my Nan and her passing shook me. I decided to quit the band I was in and go it alone. I took her maiden name ‘Wolfe’, and spent the next few years developing as a songwriter and musician.

I decided to record an album and sold the only thing of value that I owned – a Rembrandt Lithograph print – left to me by my French grandfather, the Count de Menthon, in his will. This funded me buying a portable home studio set-up, with a mic and laptop etc. I felt that selling it was necessary, and justified it as selling art to create art. I felt he would have approved, and anyway, what’s the point of hanging a Rembrandt in a rented room in New Cross…

The bones of the album were recorded in a studio created from scratch in a cottage in Wheeler End, Buckinghamshire. Working as a session musician, I was recording guitars for a friend of mine, Steve Pilgrim (formerly drummer of The Stands, now plays with Paul Weller), and we finished a day early. On that day, we recorded all the drums for ‘Morning Brings a Flood’. From then on, it was a case of anywhere will do. Overdubs were laid down in various places – my loft in New Cross (where I also made the video for Teabags in Ashtrays), my parents’ spare room in Woolwich… occasionally I’d sneak into the Basement Studio in Brick Lane, late at night when sessions had finished, to use their Harmonium and vintage microphones.”

After some final tweaks, Wolfe handed the album to the hugely respected Ray Staff to master (Staff has previously worked on albums by The Clash, Led Zeppelin, Brian Eno, Nick Cave etc), and ‘Morning Brings a Flood’ was finally ready.

So, a Rembrandt painting down, but a debut album up, Alex chose to adorn an already startlingly beautiful record with extras in the shape of videos and artwork, that he developed a passion for along the way. He created the charming stop frame animation video for ‘Teabags in Ashtrays’  in his loft and followed that with the 7 minute album closer ‘Stuck Under September’ as a short film. ” ‘Stuck Under September’ is a poem – the story of a broken love affair between the sun and the moon… the title of the album is lifted from its lyric and in many ways is the apex of the album.” The film stars Emilia Fox as the moon, and was premiered at the National Portrait Gallery in September 2009.
The album artwork came from a chance visit to Goldsmiths (100 yards from Wolfe’s front door), where he fell in love with a painting caled ‘The Future; Stage 1’, “…as soon as I saw it, I knew it was the cover. An abstract horizon or a morning searchlight, it made the record make more sense somehow”.

EVEN MORE ABOUT ALEX