Spanning three continents their story travels from Ethiopia to the UK via California and Sweden. Riddled with bizarre co-incidences, heartbreak and tragedy, it is a story of triumph over adversity and a sublime musical talent that was always going to save the day.

Their first single ‘Innocent’ was a crossover rap track, which went on to become a world-wide hit turning the band’s lives upside down.  It plunged them into the spotlight as it reached platinum status in France. A successful debut album ‘The Battle Of Adwa’ followed – the title referring to a famous Ethiopian battle in the colonial wars. 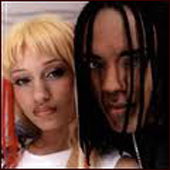 get a UK release due to personnel changes at their record label at the time.  The political situation at the label sidelined the band for three years. Locked in by a deal akin to a Chinese prison sentence, the band was eventually released from their contractual obligations in 2000.

Immediately thereafter, Addis Black Widow were snapped up by Instant Karma.  They have already achieved huge success in Europe with their debut release for the label yielding a No. 1 and three Top 3 singles all over Scandinavia.  Their singles also charted in the Top 5 of every country they were released in.

This is Refreshing corky hip hop and mentally ill pop! It’s black comedy.
Pigeon and cream have a whole lot of fun telling sad tragic stories! Pigeon’s high tuned voice in contrast with Cream’s husky dominant voice make a perfect playground for unseen musical behavior that is definitely rare in today’s scene.
This is a self made band; Pigeon and Cream write, produce, and even record all of their material themselves! Pigeon directs the bands videos and Cream designs and does all the artworks for the website, CD covers, etc.  They even take their own pictures most of the time!

Cream is the Engine of the group and a true individual.  She was born in Iran to a black American/ Puerto Rican father and a Persian/Russian mother.   Inspired by her parents work in the arts (her father was a Theatre Director, her mother an actress).  Cream took to the stage from an early age.

Cream grew up in Oakland, California then moved to Sweden at the age of 16. Constantly in trouble for minor misdemeanors, Cream left more schools and had

fights with more boys than she can remember. By her own admission she was ‘the weirdest character’ at any school she attended, never wanting to fit in the “norms”.

As a teenager Cream gained a reputation as an accomplished graffiti artist, showing her love for females by illustrating beautiful explicit goddesses everywhere she went. She would often hang out with a guy from the care home across the road named Pigeon.  They would sometimes rap together. Pigeon & Cream would crib the beats from old Vinyl records, chop them up and record them on a battered cassette recorder. Against this crude background they would take it in turns to rap over their home made breakbeats.

Aside from being an accomplished rapper, singer and producer, Pigeon speaks nine languages and could (should you ask) make you a one string violin with the aid of rat’s intestine.

Pigeon was born in Ethiopia at a time of great civil unrest. The threat of civil war loomed large and Pigeon’s mother, worried for the safety of her children, sent her three sons to the US in order to avoid the call to arms. Upon arrival, the three

children planned to stay with their Grandfather.  They soon discovered, however, that their grandfather had passed away some time before. The three brothers were separated and shipped to different care homes in the Bay Area of San Francisco.  Pigeon was only six years old.

The years that followed witnessed an endless succession of different care homes and failed attempts to assimilate within a foster family. As a teenager Pigeon found solace in the wall to wall hip hop emanating from the beat-up Cadillacs that would cruise the block.  He immersed himself in hip hop culture, skateboarding and hanging around record stores by day, break dancing and daubing graffiti by night.