OperaBabes are Rebecca Knight and Karen England.
Their meteoric rise to fame began in 2001 when, after busking in Covent Garden to support their singing lessons, the two exquisite song birds were discovered by a talent scout who invited them to perform at the FA Cup Final, televised to 500 million people across the globe, and the UEFA Champions League final in Milan.

A record company bidding war began, and the OperaBabes were born. The girls went on to release their debut album Beyond Imagination which went straight to No.1 in the UK Classical Charts, staying there for 11 weeks and selling half a

million copies, and hit No.4 in the US billboard charts.
The magnificent twosome subsequently went on to perform at the Royal Albert Hall for her Majesty the Queen on many occasions including at the Festival of Remembrance at the Royal Albert Hall, the launch of the Commonwealth Games at Buckingham Palace and the Prom at the Palace for the Queens Jubilee celebrations. 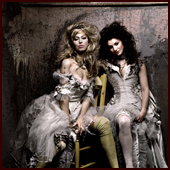 National Orchestra, the London Symphony Orchestra, the Berlin Symphony Orchestra and many more. They perform regularly at all of Britain’s major venues, indoor and out, from the Royal Albert Hall to Leeds Castle and their numerous television appearances range from Good Morning America in the US to GMTV.
They have been the subject of 3 documentaries, 2 in the UK for ITV and the 3rd in the US for CBS. Taking America by storm, they recently performed with Placido Domingo at Los Angeles Opera and made history by becoming the first classical act ever to perform in Las Vegas at the legendary Stardust Casino.

Their eagerly awaited second album “Renaissance” was produced by Noel Vine to overwhelming critical acclaim and features classics such as Pie Jesu, Casta Diva and a beautiful reading of Send In The Clowns.

download on iTunes or buy the album from Amazon.

‘absolutely stunning…’
‘a wonderful evening’s entertainment, brimming with personality with two of our brightest opera stars…’
‘time for the babes to be seen and heard…’  THE TIMES
‘classical music’s sensations…’  THE INDEPENDENT
‘rebecca and karen had the audience in the palm of their hands…’  THE SCOTSMAN
‘beautifully unforced, natural and perfectly blended…  CHICHESTER FESTIVAL