The story begins in a small forest town called Ebersberg in southern Germany where the young Eva Katharina discovered her passion for writing songs.  Together with her sister, a modern/ballet dancer, she set off on series of live performances at small theatres and festivals around Europe. This gave way to a strong visual sense which has remained with Eva and is evident now in the band’s stage performances and video projections.

Having come to songwriting through the guitar Eva soon realised that she wanted to explore other instruments and the opportunities they present and while still a teenager she moved to England, bought a cheap keyboard, a drum machine and a harmonica.
Settling in Brighton she met Tim Cotterell (keys, electronics) and Steve Elston (guitar and vocals) and together these three form the nucleus of Das Fenster, with ex-Elastica drummer Justin Welch and Chris Deyl on bass. 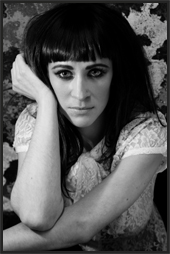 They spent a couple of years honing their craft on the local live circuit, attracting acclaim from the likes of the BBC’s Tom Robinson , the Daily Telegraph and others; preferring to keep their own counsel before embarking on the recording process for their remarkable, epic debut album “And found no end, in wandering mazes lost”.
In the album they have created a vast swirling landscape as backdrop to Eva Katharina’s songs; at times dark and even sinister, while infused with melody and beautiful vocals throughout. It’s difficult to pigeon-hole a record that fuses rock with strong classical elements, folk with the avant garde! The band is currently putting the finishing touches to the album which is due for release next spring.
In the meantime, a taster: The My World EP delivers four immense tracks and features the Iskra String Quartet.Says Katharina: “We wanted players with a bit of an edge to them , because of the song, so those guys were perfect, having worked with Johan Johannsson, Sufjan Stevens and Radiohead.. . We’d also heard them playing Dvorak’s ‘Lento’ and loved their interpretation”.
The My World EP is out now on iTunes and all good download stores through Dharma Records.