Hailing from the Valleys of South Wales, The Kennedy Soundtrack blend a mix of styles to form their own unique sound. Originally taking influence from hip hop and the alternative rock movements of the 1990’s, they cut their teeth playing the legendary TJ’s in Newport.

Signing to Instant Karma in 2001 the band went on to play numerous festivals including Reading and Leeds and toured extensively with the likes of Pitchshifter, Taproot, Senser, Pink(!) and fellow Newportonians Skindred.

Releasing their album “Tale of 2 Cities” in 2002 they were nominated for Best Newcomer at the Kerrang Awards and won best newcomers at the Welsh Music Awards in the same year.

They enjoyed success with the release of their first single “Killing Music” which reached the top 5 of the Kerrang charts and their follow up singles 24/7 and Bloodshot Eyes hit the national charts.

After a 16 year hiatus the band have reunited and entered the studio with Romesh Dodangonda (Bring Me The Horizon, Funeral For A Friend, Kids In Glass Houses etc) to write and record  new record. The first fruits of this collaboration is this reworking of their classic The Wrong Day, which follows the release in December of their B-sides and rarities album and their first (sold out!) live show in 16 years!

“Tale of 2 Cities” is essential listening.

This five piece band hailing from South Wales formed in early 1999. Meeting at the Gwent tertiary college in Cross Keys, the group blended a mix of tastes from the likes of ‘Stereophonics’ to ‘Rage Against the Machine’ and after a few line up and name changes they finally found their feet at the beginning of 2000.
Finalising their line up and naming themselves ‘The Kennedy Soundtrack’ 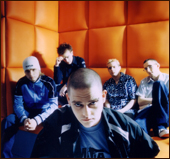 Signing to Instant Karma in April 2001 the group went on to play at numerous festivals including the prestigious Reading and Leeds festivals and toured with the likes of Pitchshifter, Taproot, Sencer, Pink and their fellow Newportians SkinDred.

British Newcomer at the Kerrang Awards and won Best Welsh Newcomers at the welsh music awards in the same year. The album also featured E-Swift and Too Much of American Hip Hop group ‘Tha Alkoholiks’

They also enjoyed success with the release of their first single ‘Killing Music’ reaching the top 5 in the Kerrang charts and their following singles ‘24/7’ and ‘Bloodshot Eyes’ getting into the top 75.

The album is waiting for you at iTunes and all the other download and streaming shops.

Review from DROWNED IN SOUND

The sound of “The Kennedy Soundtrack” has been honed from a mixture of rap/rock and hip-hop a combination of all that on paper shouldn’t work, but in reality its one of the most infectious sounds you will hear. The band come from South East Wales, Blackwood, Pontypool, Caldicot and Risca, they met at a local college where they were studying music or in Nic’s case drama and getting stoned (He failed drama, but got a degree in stonedology). The band formed in the Autumn of 1999 and played shitty pub and club gigs in the valleys and in Newport , writing great songs and generally having fun. 2000 saw the band change they experimented with musical styles, adding members (and taking them away again) and stepping up a league on the music circuit. They began to play London, with their first gig in “The Sound Republic” on Leicester Square, since then they have played London many times with only one bad gig (We’ll talk of that one more a little later). The year just got better with gigs at “The Big Weekend” Cardiff, and the opening slot on the Carling Premier Stage at Reading Festival on the Sunday afternoon. The band are constantly gigging, and when they aren’t they are either rehearsing or writing new material. A Kennedy Soundtrack gig is an emotional experience. A kind of musical roller coaster ride, guaranteed to excite, and always giving you value for money, a smile on your face and a feelgood factor as you leave the gig. If you’ve been to a gig you’ll know what I mean, if you haven’t then I suggest that you look in the gig listing to find out when they are near you and go and see them. The band are Nic Havard:- rapper, Dave Challenger:- vocals and lead guitar, Rob Giles:-guitar and effects, Elliot Blake:- Bass and backing vocals, and finally Troy Marshall:- Drums. The band have written their own biogs by way of an introduction, if you meet them don’t be shy, they are the most approachable band in the world, just buy them their favourite drink and chill out.