The ad that launched the iPhone

Einar Tonsberg spent his formative years growing up in Iceland’s Reykjavik pursuing honourable youthful pastimes like building snow houses, falling hopelessly in love and snorting the local vodka-based tipple. His mum sent him to music school to study piano as a boy. “I’d rather have been kicking a football round with mates” he remonstrates, but he also admits it was an invaluable experience.
It spurred him on to buy his first keyboard at 13 and hook up with three fellow classmates; two of them on keyboards and the other on drums. The young Einar was heavily influenced by Basildon’s finest, Depeche Mode, but as a band they 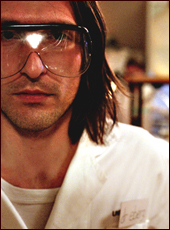 all really craved a rock and roll sound, so he learnt guitar. “This was a disaster” he readily admits, “We were a decent electro band but a very average rock band.”

Working his way through a plethora of local combos – pop, punk, electro – Einar was content to be making music with like-minded friends wherever it led him. In time he grew to realise that to fulfil his musical urges, he would have to go it alone – and so Eberg was hatched.

A skewed take on pop quickly became the blueprint for the Eberg sound, “First there would be sounds and rhythms which I found interesting” and songs would develop from there. He had limited gear and a few immovable rules – mainly to avoid writing in the traditional way. This process would lead to what would eventually become his first album ‘Plastic Lions’ in 2004. The album found many fans and glittering reviews prompting music industry bible Music Week to declare the Icelandic troubadour a “revelation”.

His constant search for intriguing sounds found him ‘inventing’ and ‘building’ the “eharp”, a bastardisation of a Fender Strat and a coat hanger. “I’ve always been interested in putting normal things together and making them unnormal” he enthuses. In many ways the eharp is the embodiment of the Eberg ethos, a little bit hand-made, a little bit warped but containing the DNA of classic rock.

So bounding into 2006 and we see Eberg settled at a new home Instant Karma/Dharma Records, and a bright shiny new album Voff Voff to shout about. Voff Voff incidentally is the sound that Icelandic dogs make. It is classic Eberg, full of odd noises and left turns but brimming with heart tugging irresistible pop. Future classics such as the cheekily titled Love Your Bum or the instantly hummable Inside Your Head seem to bound up and greet you like old friends. It is this perfect blend of leftfield capabilities and classic song writing that is what endears Eberg to all that hear him.

Inside Your Head has soundtracked an episode of the O.C. and helped launch Apple’s iPhone in the U.S. On the personal front, Eberg is slowly but surely building his own house in Iceland. It’s a step up from building CD cases but one this very talented chap is taking in his stride. He and his gorgeous Irish/Icelandic girlfriend have just had a beautiful daughter.

VoffVoff is available on Dharma Records and features the radio hits Love Your Bum, I’m Moving To Wales, plus The Twinkle Tune and Inside Your Head.