You’ve heard the record. Do you really need to ask? 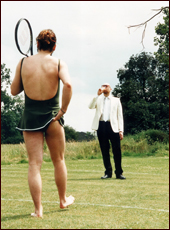 Hopefully. This singular city with its rich history of singular pop and avant-garde ideas, guitars and synths, Jarvis and Joe Cocker, bluntness and irony, arty fops and ordinary fellas. Once it was the capital city of the People’s Republic Of South Yorkshire, now it’s just awkward and skint – an independent, unreconstructed northern city where maverick talent; Warp, The Designers’ Republic, NY Sushi, Fat Truckers, Richard Hawley, has always grown in the shadows.

Naturally, one of them is from… Essex. Dean Honer,  who you might already know as the bald, bespectacled one from All Seeing I. Dean came to Sheffield in the mid-80’s. He was in love with a girl and a local electronic band called Dig Vis Drill. Plus, the beer was 30p-a-pint. And the miner’s strike was on. “London was horrible at the time, where Sheffield was a socialist city. There was a good atmosphere.”

Jarrod Gosling, meanwhile, was too busy head-banging down Rebels (“this old rock club”) to notice. Until, that is, college mates started dragging him along to The Leadmill.

At the height of “baggy”, they’d play half-an-hour of Warp stuff in the middle of the night; Forgemasters, ‘Sweet Exorcist’ and Nightmares On Wax. Jarrod was hooked: “It was good, dancey but scarey.” It being scarey being the key thing? “Yeah.”

The duo met in 1991, rifling, prophetically enough, through old vinyl in Sheffield Library’s record lending department. They were, depending on what mood they’re in when they’re being interviewed, either shopping or stealing. “No,” denies Dean, “we weren’t stealing, there was a sale on, because they were moving to CD. And wherever there’s a sale on you’ll find Jarrod.”

They got talking about Warp and a mutual friend, Sean. Dean had a studio and invited Jarrod round. They started “pissing about”.

Which is apt, as what with All Seeing I and the Sheffield music scene’s mañana culture, it would be five years before the duo brought out a record – the original release of ‘Daydream In Blue’ – and another five before it, finally, breached the charts, reaching no.19 in 2001.

Hinged on a sample of 70’s easy listening outfit the Gunther Kallman Choir, ‘Daydream…’ was/ is a soaring, sizzling slice of sweet pyschedelia and overloaded Moogs. I Monster love a twist, and, over a few listens, as you stripped back the distortion from the vocodered vocal, this ostensibly innocent, rosy-cheeked hit in fact revealed a cryptic, sinister tale of someone finding themselves crawling around naked on a bathroom floor, cold and confused. “We like the mystery of what goes on behind the net curtains of suburban Britain,” explains Dean. “Is your next door neighbour a Readers’ Wife or a Fred West? We like Gothic in the sense of Edgar Allan Poe and the Shelleys.” He pauses: “We’re not so keen on Marilyn Manson.” 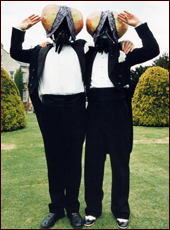 Suitably, for a band named after one, they’ve also got a thing for idiosyncratic British horror films; Wicker Man, Hammer, Amicus and portmanteau collections of obscure bloody shorts. “They’re tight little stories with an evil twist, like our tracks.”

Other bands would have been eager to capitalise on ‘Daydream’s success, but I Monster aren’t other bands. There had, actually, already been an album, ‘These Are Our Children’, in 1998. But, it was stuffed with uncleared samples, so it had to be limited to 1000 copies. “You won’t let me sample Iron Maiden or Saxon though, will you,” Jarrod looks at Dean. “You draw the line there don’t you?”

Dean smiles: “I draw the line at Europe.”

So I Monster started assembling their opus. They wouldn’t rush. It was too important. Indeed, one of the defining characteristics of Sheffield’s thriving new wave electronic music scene – of which I Monster and their label Twins Of Evil are an integral part – is an insistence on working at your own pace, on your own terms. Art, although they would never be as poncey as to say it, doesn’t work to timetables. Or marketing plans.

Recorded in Dean’s home studio – “It was a most civilised affair. It overlooks a bowling green so we spent a lot of time drinking Pimms and placing bets [hence the title] on our favourite geriatrics.” – it was a 15-track Jeckyll & Hyde opus, as psychotic as it is psychedelic, a fabulous synthetic pop edifice built on foundations of smashed-up 70’s synths and shattered 60’s (experimental electronic) vinyl. Not to mention Sparks, Bowie, T Rex and psychedelic prog rock. From the accordion-led chanson electro of ‘Backseat Of My Car’ through ‘Stobart’s Blues’ to the Two Tone infant school skank of ‘These Are…’ it roamed far and wide with jolly, self-confident abandon. “People,” says Dean, with a certain understatement, “can’t pigeon-hole us.”

It was also, in the finest traditions of British pop from Madness to Pulp, hilarious. Dry, wry, northern and cynical, these are sugary tunes with stiletto blades up their sleeves. In the soaring ELOctronic pop of ‘Hey Mrs’ – subject matter: “Cross dressing, randy housewives, seedy pubs.”- ‘Everyone’s A Loser’, their “gloomy northern” response to Hot Chocolate’s ‘Everyone’s A Winner’, and ‘Sunny Delights’, a song about how odd sunbathing is, you have a trio of intelligent, combative pop songs that are as fine an antidote to anodyne Pop Idol culture as it’s possible to get.

D: “I’ve always been into pop music, I was brought up listening to Bowie, Bolan and Bryan Ferry. I was brought up in the tradition of good pop music.”
J: “It’s a challenge, isn’t it? Trying to do catchy pop songs that are different. It’s what The Beatles did, I suppose.”

And, now, you lucky people, you’re about to get a second bite at the (lysergic spiked) cherry, as ‘Neveroddoreven’, gets a welcome release, complete with a new glam mix of ‘Hey Mrs’, a rockier ‘Backseat…’ and I Monster’s theme music for Brit-hit Shaun Of The Dead.

Meanwhile, I Monster have been busy, playing festivals in France and 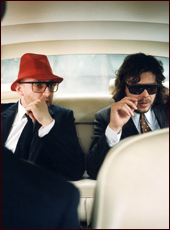 Switzerland, where they have a substantial underground following – “Well, Jarrod sounds like Edith Piaf through a vocoder and I look like Sacha Distel.” – as well as completing a “balloon race across the Andes”, a “sponsored walk through the Gobi dessert” and trying to come up with a suitable metaphor for what it is they do. “It’s like a ride on the Waltzers,” decides Dean. “You have a great time being spun around by two greasy Teds, but, simultaneously, you’re paralysed by fear. You feel queasy but can’t resist getting back on.”

Originally released in the summer of 2004, the 14-track album almost instantaneously became a lost cult classic as it was released during a period of transition for the band’s label. Thankfully, with Dharma Records now a fully-fledged independent, the decision was made to give the album a second chance. Now with new cover artwork and a refreshed track listing, NeveroddoreveN should reap its rightful rewards

Already a word-of-mouth cult, it’s time to let the rest of the world in on Sheffield’s best kept secret. I Monster deserve it and the world deserves ‘Neveroddoreven’
REMIXED AND RARE……………………… NEVERODDOREVEN